The names given to groups of particular birds are always interning, and sometimes head-scratching to say the least, but with a little imagination these do seem to fit the bill.

Last week we got paid a visit by a group of six Stellar’s Jays. While it is typical for perhaps two or three to hang around the nearby forest six at once was a new experience. All six seemed friendly enough towards each other and curious enough about us so a “band” of jays…well perhaps.

A cast….ummmm….maybe. They each did seem to play a role in the whole show. Some were boisterous and bold others a bit more shy like this guy below who hung around on the edge of the forest while other paraded by quite close to us. Unfortunately they did not congregate or come close enough together for a nice group shot but we caught at least three or four individuals who all seemed to strike a similar pose and looked remarkably similar as well.

All seemed to be having a good time and displayed quite a range of vocalizations ranging for the usual scolding Jay sounds to songbird initiations and one Jay was quite adept a imitating the sounds of a pair of Golden Eagles we have heard all winter calling from the tops of the trees. So in their very own Stellar’s Jay way it was indeed a party. 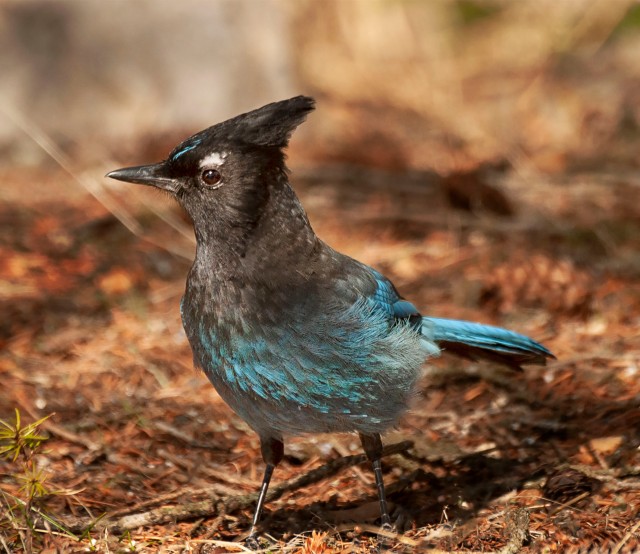 And while we were indeed scolded every now and again for hanging around in their forest it was a gentle scolding and one we could easily accept for invading their space.

So there you have it a nice visit with a “band”, “cast”, “party”, or perhaps a “scold” of Stellar’s Jays on a April afternoon.