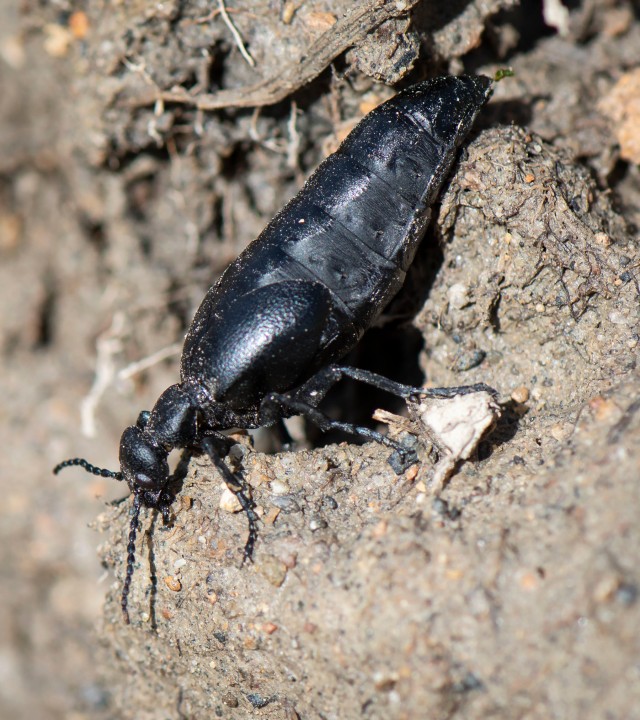 Last week on our daily walks we noticed several of these black oil beetles along the road side and in the open fields near our home. They are very large and we were not sure what they were. A strange beetle or extremely strange ants?

Upon researching what we found we were amazed to find these are flightless Beetles with a truly fascinating life cycle.

Encyclopedia of life describes the lifecycle as follows:

“Oil beetles have fascinating life-cycles. The larvae are parasites of a number of species of ground-nesting solitary bee. Towards the end of spring, female oil beetles dig burrows in the ground close to colonies of host bees, into which they lay around 1000 eggs. These eggs usually hatch the following year in order to coincide with the emergence of the bees. The oil beetle larvae (known as tringulins) are very active, and climb up onto flowers where they wait for a host bee. They attach themselves to the bee, and if they are lucky and attach to the right type of species they will be flown to the host’s burrow, where the tringulin oil beetle turns into a grub-like larva, and develops, feeding upon the pollen stores and eggs of the host. The larva pupates and the resulting adult beetle spends the winter inside the host’s burrow before emerging the following spring.”

We think this female might have been building a nest to lay her eggs?

Piotr Nasckrecki wrote a wonderful article on them on his blog The Smaller Majority which is altogether fascinating.

While we saw several oil beetles last week we only had the opportunity to photograph one, which like the others, was constantly on the move but moving slow enough for us to photograph.